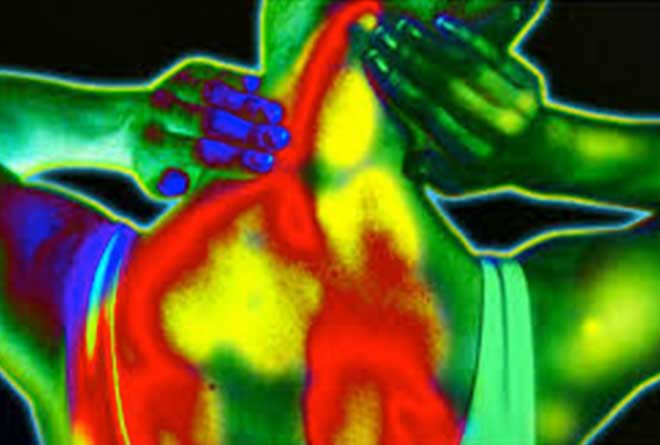 FMS (Fibromyalgia Syndrome) is a widespread pain and fatigue syndrome without a known cause. The earliest description of FMS in the medical literature dates back to 1869 when the Physician George Beard described a syndrome he named Neurasthenia, and later in 1904 a Neurologist, William Gower coined the term “Fibrositis”. In 1976, the name was changed to Fibomyalgia which means pain in the muscles, ligaments, and tendons. Most patients with Fibromyalgia complain of hurting all over or “from head to toe”. The neck and back, hips and shoulders are typically prominent complaints. They will also complain of burning sensations, numbness, dry eyes, dry mouth, temperature sensitivity and feeling cold, headaches, fatigue, poor sleep, dizziness, abdominal and bladder problems, sensitivities to medications, restless legs, jaw discomfort, and difficulties with mood, memory and constipation.

How is FMS Diagnosed?

The official criteria was developed by the American Academy of Rheumatology, and includes pain in the left and right sides of the body and upper and lower half of the body for at least 3 months. There must also be at least 11 of 18 anatomically specific “tender points”. Laboratory tests may be unremarkable but hormone and autoimmune tests sometimes reveal abnormalities. Overnight sleep studies are commonly ordered now as over 50% of patients are found to have sleep disordered breathing, many have periodic limb movement disorder and most have problems with little or no deep sleep. Most patients with FMS have a problem with their deep sleep known as “Alpha/Delta” sleep, a persistence of wake-like brain patterns throughout the night, but many sleep labs do not routinely screen for this unfortunately. MRIs might be ordered to rule out other conditions that can affect the brain and spinal cord.

What is the cause of Fibromyalgia?

The ultimate cause of FMS is still a mystery, but there is a lot that is now known about this condition...

How do we treat Fibromyalgia?

Reduction of pain is a primary goal and medications that boost serotonin and norepinepherine such as duloxetine and milnaciprin which are both now FDA approved for the treatment of FMS. These SNRI's can occasionally cause nausea, sleep problems, sweating, and decreased libido. Pregabalin, which is also FDA approved, has been studied and shown to be effective for treatment of pain but can cause swelling, and weight gain, as well as somnolence. A few patients can respond to medications that work through dopamine such as Wellbutrin or Mirapex.

Decreasing Substance P with agents like Tizanidine can also be helpful for pain and muscle spasm and may help sleep. Narcotic agents are thought to be a last choice but the pseudo-narcotic Tramadol can be safe and effective. Experimental medications that improve deep sleep, such as Sodium Oxybate, are currently under investigation but other sleep aids are frequently used.

Hormonal manipulation may provide benefit in some patients. Stimulants can be useful for cognitive impairment and fatigue. Beta-blockers, though they can interfere with sleep and mood, can be helpful for autonomic dysfunction which is commonly seen in FMS. Gaufenesin, which had been used frequently in the past, is now no longer considered a mainstay of therapy as it has not been shown to be helpful in randomized-blinded trials.

A healthy diet low in refined sugar may help some patients. Gluten sensitivity or allergy is also seen in some patients and can mimic many symptoms of FMS. Stretching, low impact aerobic exercise, and aquatic therapy can also be helpful. Organized stress reduction is critical, meditation and yoga have been found to be beneficial